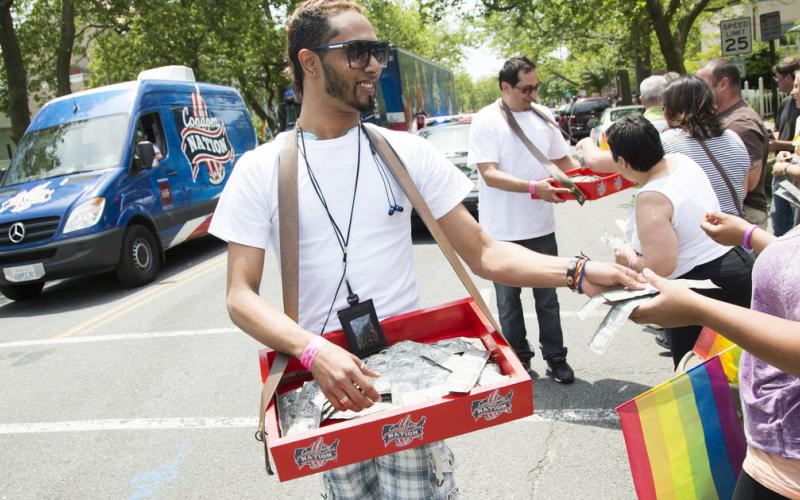 Photo credit: npr.org
My name is Kyle. I’m currently a sophomore at Dunbar High School. I work at YWP (Young Women’s Project). YWP is an organization that hires youth to teach other youth about safe sex, STD prevention, and more in schools. We provide people with internal condoms, external condoms, flavored condoms, dental dams, lube, or anything youth might need to have safe sex. Have you ever tried distributing condoms to your friends? Every time I distribute condoms to my friends at school, they just take all the condoms. They don’t even listen to what I'm trying to tell them they just focus on the condoms.

Distributing condoms at school is fun sometimes because of the responses I get when I ask other youth if they want any condoms. Boys seem to rush to me when I'm passing out condoms. Some snatched more bags than they were supposed to. Some females act like they do not need any.
I also think that people aren't telling me the whole truth when I distribute condoms. Some girls lie and say they don’t need a condom because they don’t want me to know that they’re sexually active. I guess they think I am going to expose them and tell everyone. If people aren’t comfortable getting condoms from me then there are other Wrap MC’s (including girls) in my school to get condoms from.

Photo credit: wamu.org
Some of my male friends lie and say that they don’t need a condom when certain people are around. If I was to give one of my friends a condom in front of his girlfriend, his girlfriend would then question him about why he needs condoms. Another thing people lie about is their condom size. Boys lie about their condom size to impress girls. When I‘m walking around distributing condoms some guys try and ask for a Magnum because a girl is right there. People don’t realize that all condoms fit all sizes. I’ve seen someone take one of the red LifeStyle condoms and stuff three tennis balls in the condom and it didn’t pop! Then they started swinging the condom. It still didn’t pop! That is proof that any external condom can fit any size. Some guys just carry around condoms so people will think that they are sexually active. I know this because I used to do that when I was younger.
I even gave a teacher a few condoms before. I tried to teach some of the teachers about STI prevention and safe sex but they claimed they already knew. People always lie and say they already know so they don’t have to listen to me teach them. Some people just want to get some condoms and go about their business and not take the time to listen to me talk. One day my math teacher tried to help me with a classroom presentation that I had to do. He wasn’t really doing anything but repeating everything I said. Everything I said, he said the same thing but put it in his own words. He didn’t really know what he was talking about. All I can really say is that he knew how to put a condom on. Schools need us Wrap MC’s in school teaching about safe sex. The teachers don’t teach students about it, we don't do it in health class, so that leaves it to us and the nurse. Do we want to add this bc of the teacher?

Last school year, in math I had to do a classroom presentation about STI prevention and how to put a condom on properly. When I was telling everyone how to put a condom on properly I had to use a model penis. Everybody in the class started laughing. They thought it was funny. When I finished and we went to lunch they told me that they were recording me- I know that they were playing so I thought it was funny too. Some of them still joke about it up to this day.

The same person that recorded me wanted to work with me distributing condoms. I took him to where I worked and got him signed up. Soon he is going to be a Wrap MC, and have to do things like classroom and lunchroom presentations. He is currently getting trained on all of the stuff I learned last year. He is getting taught things such as STI prevention, proper condom use, and more. Next year he is going to be in the position I am in. Teenagers may seem immature when talking about sex, but at least they are still learning about it, and getting interested in doing what I’m doing.
Now, I just have a few questions for the potential mayors out there: