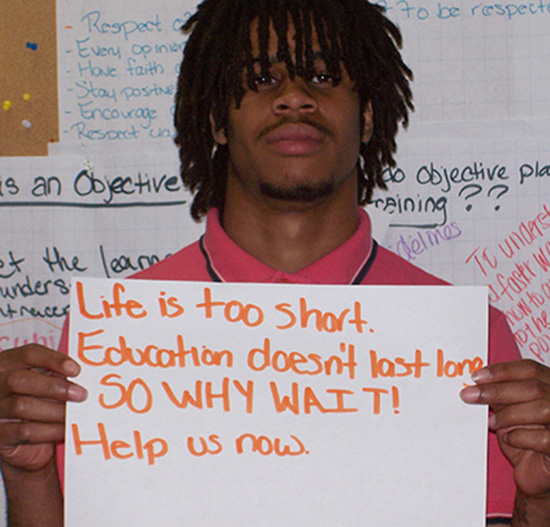 YWP works with youth with varying academic needs. They range from academic support with basic to rigorous AP classes, tutors, help applying to college, to health literacy. The homeless youth we work with need a place to do homework, have access to books, and use working computers. These are the problems we know how to solve – and should be solving more often in more schools. And then there are the ones we haven’t figured out yet like basic literacy. Many of the youth we work with have trouble writing a complete sentence, doing basic arithmetic, and even reading. Additionally, the lack of health literacy has drastic effects not only on educational outcomes, but also on wellness as children and adults, and life expectancy.

Youth are not engaged in their education. High truancy and chronic tardiness levels in our high schools demonstrates that students are not engaged.  According to the Children’s Law Center and DC Lawyers for Youth, “half of high school students — 56 percent —were considered “chronically truant” during the 2013-2014.”  A significant percentage of our high school aged youth miss school on a regular basis for many reasons– home responsibilities, weather, travel, and (most troubling) because they do not believe that the education they are getting will impact their success in life. The impact of the low student engagement is significant across the District and has deep implications for the way in which we select and apply educational interventions. I’ve included more data on these issues below:

Health Literacy: Data from the 2013 DC-CAS health test scores demonstrate the same lack of knowledge. The overall score for high school health data was 63 percent (up from 62 percent the year before) and 64 percent for middle school youth. Scores for sexuality and reproduction was among the highest at 73 percent (but down from 75 percent last year). Scores on most other areas were lower. High school students scored 49 percent for locating health information (up from 46 percent the year before), 61 percent for nutrition, 61 percent for disease prevention, and 53 percent for physical education.
Subscribed